If you’ve ever seen Helen Hunt and Bill Paxton chase down tornadoes in Oklahoma, or Dorothy Gale flatten the Wicked Witch of the East with her house in a particularly vicious Kansas storm, then you’re probably familiar with the concept of “Tornado Alley.”

Tornado Alley is the area spreading across the Plains States that seems to see increased tornado activity year over year. But twisters aren’t limited to a handful of states. In fact, other regions in the U.S. have faced even more damaging storms in recent years, leading many experts to conclude the infamous Tornado Alley is nothing but an outdated term.

What Time of Year do Tornadoes Occur?

Tornadoes are not always predictable, but in a typical year based on historical data, tornado season begins in March and ends later in the summer, typically July or early August, meaning most tornadoes occur within this time frame. Most tornadoes also occur between the hours of 4 p.m. and 9 p.m.

Despite this data, it’s important to remember tornadoes can occur at any time of the year, any time of the day, no matter where you are in the U.S. Additionally, while the U.S. experiences the highest number of tornadoes, they can still occur anywhere in the world. Two areas with high activity outside American borders are Argentina and Bangladesh.

What is Tornado Alley?

Tornado Alley, by definition, has no scientific definition. The term is colloquially used to describe a collection of states that have traditionally seen high frequencies of tornado activity each year. The term “Tornado Alley” was first used in a 1952 research project aiming to explore storms in the Plains States region. The media picked up on the term to the point where today it is now taught in American textbooks.

As the region does not officially exist, nor do its boundaries, but states traditionally included as part of Tornado Alley include South Dakota, Nebraska, Iowa, Kansas, Oklahoma and parts of northern Texas.

Why Do Tornadoes Form in Tornado Alley?

Weather conditions are just right to cause tornadoes in the Plains States region. First, the terrain is flat and relatively dry. Second, the area is rife with atmospheric instability with warm air from the south, from the Equator, meeting cold air from the north, from Canada.

When these two conflicting air masses meet, the warm Equator air rises and frigid Canadian air sinks, causing a violent storm. If the two air masses are moving at very different speeds, funnel clouds can form. Once these funnel clouds touch the ground, a tornado has officially formed.

What is Dixie Alley?

Tornado Alley may encompass the flat, dry Plains States, but tornadoes can occur anywhere at any time. There are several other regions in the U.S. recognized as hot spots for twisters, one of which is often referred to as “Dixie Alley.”

Dixie Alley is the area in the Southeast, along the Gulf Coast, which sees frequent tornadoes, many of which are often faster and can travel farther distances. Dixie Alley sees most of its activity earlier in the season with another surge typically occurring later, closer to the fall season.

Recent studies have even suggested Dixie Alley sees more tornado activity overall compared to the traditional Tornado Alley. Some studies also show that climate change is pushing dry, desert air farther east, causing Tornado Alley to “shift” eastward. While the cause is to be determined, many meteorologists have concluded that at the very least, the concept of “Tornado Alley” is outdated.

Where is the ‘New’ Tornado Alley?

Data from the Journal of Climate and Atmospheric Science shows that while the majority of tornadoes still take place within the Plains States “Tornado Alley” region, frequency has decreased in this area while increasing in the Southeast (“Dixie Alley”) and Midwest. 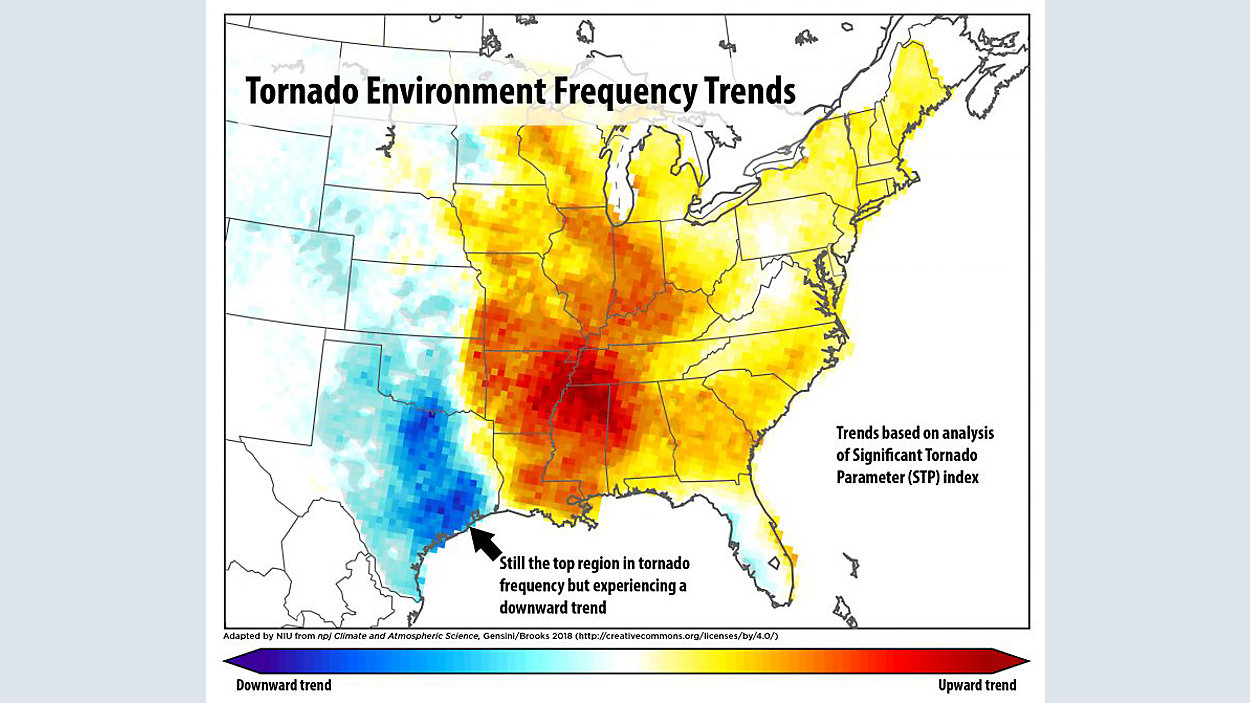 Journal of Climate and Atmospheric Science

Readers in the Southeast will remember recent tornado outbreaks that caused destruction and fatalities near their own homes, including Easter weekend 2020, which saw 150 tornadoes across Southeast, and April 27, 2011, which saw 217 tornadoes and 317 fatalities in the same region.

There are two ways to approach this data. One, Tornado Alley is both shifting eastward and expanding. The Southeast, or “Dixie Alley” is no longer its own entity, but an extension of Tornado Alley, seeing the same risks and frequencies of storms.

Or two, the term “Tornado Alley” is a product of the 1950s that should be removed from our vocabulary entirely. Many meteorologists lean toward this theory, saying that the term “alley” is too restrictive, implying that only certain people in a narrow area need to invest in tornado preparedness. In reality, tornadoes occur frequently over an area that covers 40% of the eastern U.S., and the Southeast is extremely vulnerable to destructive tornadoes.

Why Does it Matter if Tornado Alley shifts?

The term “Tornado Alley” conveys imagery of Dorothy and Toto running across the flat Kansas landscape, or Bill Paxton and his team speeding across the dry, smooth Oklahoma roads. Is there harm in the media firmly rooting the idea that tornadoes should only be associated with the Great Plains?

Yes. For one particular reason. The less we take the data seriously and understand the risks tornadoes pose to the Southeast, the greater the potential for destruction. The Southeast is much more densely populated than the sprawling Plains States, especially on the eastern side of the Mississippi River.

It’s difficult to minimize fatalities when people are packed close together in a region that tends to experience higher-speed tornadoes. There are also more mobile homes. In the Plains, people have long had the space and forethought to invest in infrastructure either publicly or within their own homes. It’s much harder to get a tightly packed population to one safe shelter area in the chaos of a storm.

In a nation that experiences more tornadoes than anywhere else on Earth, we cannot minimize the risks faced by the Southeast. Continuing to do so misuses disaster preparedness resources and misdirects emergency planning efforts. Placing all our resources and efforts in the Plains States leaves the Gulf Coast and Midwest vulnerable to extreme risks.

It’s not nearly as catchy as the dramatically named “Tornado Alley,” but with the data right in front of our eyes, we can’t keep using the same term to describe new phenomena. It’s time to ditch the term “Tornado Alley” and recognize the threat tornadoes pose to the majority of the eastern continental U.S.

One thing important to note is that while tornado threats are not as recognized within the Southeastern U.S., that does not mean the solution is to abandon the Plains States entirely. The areas surrounding Nebraska, Kansas and Oklahoma are still the “bullseye,” so to speak for tornado activity. This region still experiences the highest frequency of tornadoes, even if intensity is increasing in other parts of the country.

Instead, everyone, businesses and residential homeowners alike, should take part in disaster planning and preparedness surrounding tornadoes, even if they live in a low frequency area. Run tornado drills in the workplace and/or ensure your family knows what to do when sirens sound to ensure you stay safe during a violent storm. Know where you and your employees or family will go in the event of a tornado warning and keep emergency kits on hand to be safe.

Posted in Tornadoes, Weather
How to Test Your Sump Pump To Prevent Water Damage
ServiceMaster DSI Appoints 3 Seasoned Leaders to Their Executive Team